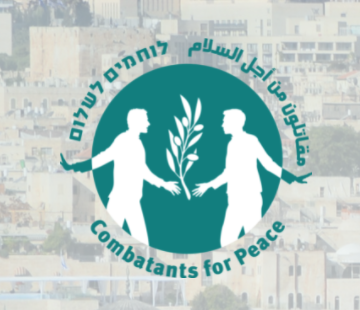 In 2006, Israeli and Palestinian former combatants, people who had taken an active role in the conflict, laid down their weapons and established Combatants for Peace. The egalitarian, bi-national, grassroots organization was founded on the belief that the cycle of violence can only be broken when Israelis and Palestinians join forces. Committed to joint nonviolent resistance, CFP works to both transform and resolve the conflict by ending the Israeli occupation and all forms of violence between the two sides and building a peaceful future for both peoples.

The history of marginalized populations is often omitted, if not altogether erased, from mainstream narratives. Our upcoming Joint Nakba Memorial Ceremony will emphasize and amplify the personal stories and history of the Palestinian people. Individual testimonies will replace political statements, providing a deeply emotional, personal Memorial.

The Joint Nakba Ceremony expresses our belief that reconciliation and respect demand a sincere reckoning with history. In 1948 more than 700,000 Palestinians became refugees, their homes and villages destroyed. But the Nakba is more than just one moment in time, it continues today as communities and families are still being pushed out of their homes. Together, as Palestinians, Israelis, and internationals, we commemorate this grief, and in doing so we renew our hope for a better future.

The past cannot be undone. But our acknowledgement and understanding of it in the present can be a deep source of healing – and can lay the groundwork for creating a peaceful future, free of occupation, war and violence.