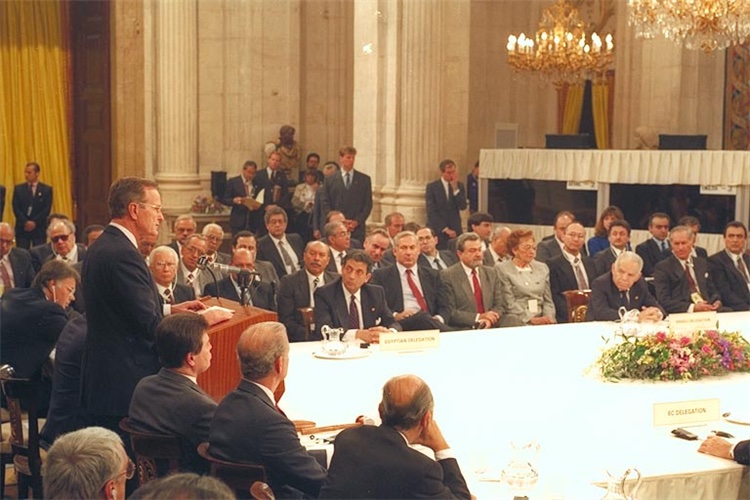 Co-sponsored by the UCLA Department of History

To mark the 30th anniversary of the Madrid Peace Conference, a panel of experts and former diplomats will discuss the historic significance of the conference and the lessons it holds for multilateral diplomacy. The Madrid conference, held from October 30 to November 1, 1991, was the first time that Israel, Syria, Jordan, Lebanon, and a Palestinian delegation (which was officially part of the Jordanian delegation) sat at the same table to negotiate face-to-face.

Shlomo Ben-Ami is professor emeritus of history at Tel Aviv University and vice president and co-founder of the Toledo International Center for Peace. He served as Israel's Foreign Minister under Prime Minister Ehud Barak, during which time he participated in the Camp David Summit and led other Israeli-Palestinian peace negotiations, including as a member of Israel’s delegation to the Madrid Peace Conference. He is the author of Scars of War, Wounds of Peace: The Israeli–Arab Tragedy (2006).

Dalia Dassa Kaye is senior fellow at the UCLA Burkle Center for International Relations and a former senior political scientist and director of the RAND Center for Middle East Public Policy. Before joining RAND, she served as a Council on Foreign Relations international affairs fellow at the Dutch Foreign Ministry and taught at the University of Amsterdam. She is the author of a book about the Madrid conference, Beyond the Handshake: Multilateral Cooperation in the Arab-Israeli Peace Process, 1991-1996 (Columbia University Press).

Hiba Husseini is managing partner of Husseini and Husseini, a West Bank-based law firm. She practiced law in Washington, D.C. prior to returning to Palestine and has served as legal adviser to peace process negotiations between the Palestinians and Israelis since 1994. She has lectured and written widely on legal and economic development issues involving Palestine. She holds a JD from Georgetown University and serves on the boards of various educational and nonprofit organizations.

Daniel Kurtzer is the S. Daniel Abraham Professor of Middle East Policy Studies at Princeton University’s School of Public and International Affairs. A 29-year career U.S. Foreign Service veteran, he served as U.S. ambassador to Egypt (1997-2001) and to Israel (2001-2005). Ambassador Kurtzer played a key role in formulating and executing American policy, in particular helping to bring about the Madrid Peace Conference. He holds a Ph.D. from Columbia University.

Lior Lehrs (co-moderator) is a policy fellow and director of the Program on Israeli-Palestinian Peacemaking at Mitvim Institute. He is also a research fellow at the Leonard Davis Institute for International Relations at the Hebrew University of Jerusalem. He was a Postdoctoral Fellow at New York University and a visiting scholar at the School of Advanced International Studies at Johns Hopkins University.

Dov Waxman (co-moderator) is the director of the Y&S Nazarian Center for Israel Studies and The Rosalinde and Arthur Gilbert Foundation Chair of Israel Studies at UCLA. Previously, he was a professor of political science, international affairs, and Israel Studies, and the Stotsky Professor of Jewish Historical and Cultural Studies at Northeastern University. His latest book is The Israeli-Palestinian Conflict: What Everyone Needs to Know (2019).