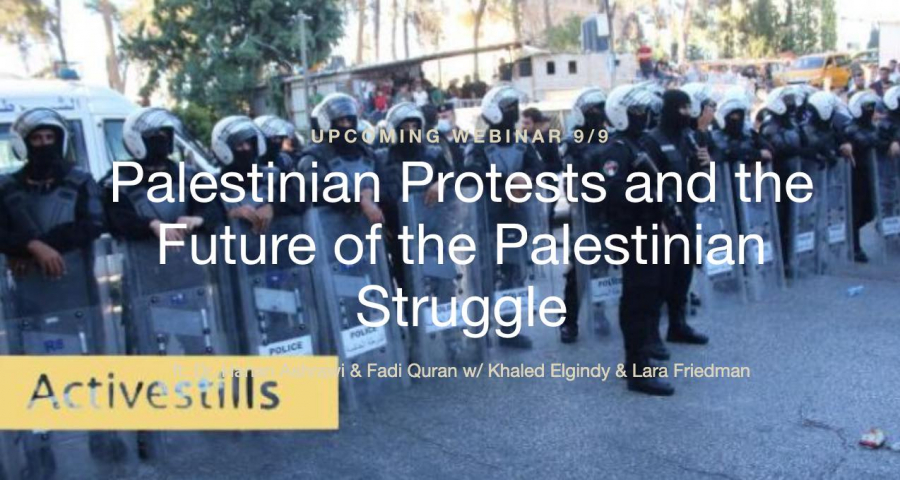 Since the Palestinian Authority’s killing of political activist Nizar Banat in June, Palestinians have been holding protests in Ramallah and other parts of the West Bank. The PA has responded with tear gas, stun grenades, and harassment of human rights defenders and journalists, in what has been described as a “concerted crackdown on freedom of speech and the right to peaceful protest.” In recent weeks, dozens of protesters - including prominent human rights activists - were detained by PA security forces.

While the detainees have since been released, the crackdown highlights the Palestinian leadership’s diminishing tolerance for dissent as well as a deeper crisis of legitimacy. What’s behind these latest protests as well as the PA’s crackdown against them? What is the relationship between the protests in Ramallah and recent Palestinian popular political mobilizations in Gaza, Jerusalem, and inside the Green Line? And what do these Palestinian initiatives mean for the overarching struggle against ongoing Israeli occupation and dispossession?

To shed light on these and other issues, the Middle East Institute (MEI) and Foundation for Foundation for Middle East Peace (FMEP) are pleased to invite you to join a public webinar featuring: Dr. Hanan Ashrawi - Palestinian leader and critic of the PA’s repression of Palestinian popular protest - together with Fadi Quran, a prominent activist who was among those recently detained by the PA.

Dr. Hanan Ashrawi is a distinguished Palestinian leader, legislator, activist, and scholar who served as a member of the Leadership Committee and as an official spokesperson of the Palestinian delegation to the Middle East peace process, beginning with the Madrid Peace Conference of 1991.  Making history as the first woman to hold a seat in the highest executive body in Palestine, she was elected as member of the Executive Committee of the Palestine Liberation Organization (PLO) in 2009 and most recently in 2018. In 1996, Dr. Ashrawi was appointed as the Palestinian Authority Minister of Higher Education and Research. She was elected to the Palestinian Legislative Council representing Jerusalem in 1996, and she was re-elected for the “Third Way” bloc ticket in 2006. As a civil society activist, she founded the Independent Commission for Human Rights (1994), MIFTAH, the Palestinian Initiative for the Promotion of Global Dialogue and Democracy (1998) and AMAN, the National Coalition for Accountability and Integrity (1999). She serves on the advisory and international boards of several global, regional and local organizations, and she is the recipient of numerous awards from all over the world, including the distinguished French decoration, “d’Officier de l’Ordre National de la Légion d’Honneur” (2016), and several academic accolades, including eleven honorary doctorates from universities in the U.S., Canada, Europe, and the Arab world. She tweets at @DrHananAshrawi.

Fadi Quran is a Campaigns Director at Avaaz, a 60-million person strong global movement mobilizing for change. He leads Avaaz MENA human rights work, as well as Avaaz’s counter disinformation efforts. Fadi is a leading community organizer in Palestine, and previously worked as UN Advocacy officer at Al-Haq. Fadi has appeared in the New York Times, NPR, the Guardian, the AFP, TIME Magazine, the Daily Telegraph, and other media outlets. You can follow him on Twitter @fadiquran.

Khaled Elgindy is a senior fellow at the Middle East Institute where he also directs MEI’s Program on Palestine and Israeli-Palestinian Affairs. He is the author of Blind Spot: America and the Palestinians, from Balfour to Trump, published by Brookings Institution Press in April 2019. Elgindy previously served as a fellow in the Foreign Policy program at the Brookings Institution from 2010 through 2018. Prior to arriving at Brookings, he served as an adviser to the Palestinian leadership in Ramallah on permanent status negotiations with Israel from 2004 to 2009, and was a key participant in the Annapolis negotiations of 2007-08. Elgindy is also an adjunct instructor in Arab Studies at Georgetown University. He tweets @elgindy_.

Lara Friedman is the president of the Foundation for Middle East Peace. With more than 25 years working in the Middle East foreign policy arena, Lara is a leading authority on U.S. foreign policy in the Middle East, with particular expertise on the Israeli-Arab conflict, Israeli settlements, Jerusalem, and the role of the U.S. Congress. Prior to joining FMEP, Lara was the Director of Policy and Government Relations at Americans for Peace Now, and before that she was a U.S. Foreign Service Officer, serving in Jerusalem, Washington, Tunis and Beirut. She tweets @LaraFriedmanDC.